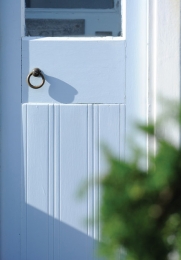 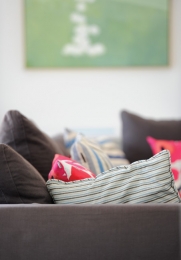 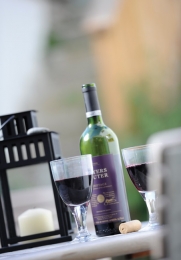 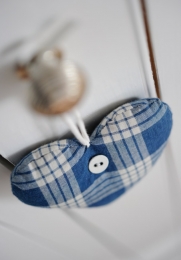 The location of this traditional Cornish house can only be described as fabulous. Perfectly situated with an uninterrupted outlook over Gerrans Bay, it lies in the heart of the small unspoilt coastal village of Portscatho within easy walking distance of all facilities which include the pub, general store, café, butchers, Post Office, galleries and beach. The house is set back from the road skirting the harbour and is separated from the pavement by a low wall and gate. The front garden has a low raised terrace, with room for a table and chairs. The outside of the house has been sensitively restored in the original style; however, the interior has been comprehensively updated and stylishly decorated throughout and furnished by two young London designers. The house has two sitting rooms, one each side of the hall; both having window seats with views of the sea and harbour.

The house is double fronted and is entered through the front door, leading into a slate floored hall SITTING ROOM 1 - with a timber floor and large rug, has two large comfy 2 seater sofas, flat screen TV/DVD, radiator, original open fireplace and vintage trunk as a coffee table. From here, a door leads by means of a few steps to the inner hall which accesses the rear entrance, dining room , kitchen and stairs. SITTING ROOM 2 is entered from the dining area and is also timber floored with a large rug, 2 large armchairs and 3 seater sofa, dresser, radiator and open fire. As throughout, both rooms are beautifully decorated with attractive cushions, pictures and mirrors.The stairs dividing the front and rear of the house are carpeted as is the main staircase . The open plan DINING AREA is wood floored and has a large wooden table seating eight , with a radiator and woodburning stove (not for use). Telephone for incoming calls.WiFi. From the dining area there is a step up into the travertine floored open plan KITCHEN area, which has a granite work surface, sink and bespoke painted wooden cupboards. The kitchen is comprehensively fitted out with an American style fridge/freezer with icemaker, Microwave, Falcon range cooker with an induction hob, and dishwasher. A small breakfast bar with 2 stools divides the kitchen and dining areas and a door leads to the outside rear garden. A further sink , together with a washing machine and drier, extra fridge and useful cupboards are located in the UTILITY ROOM ,which is accessed off the rear hall. Also off the hall is a SHOWER ROOM with ladder towel rail, shower, washbasin and WC. The HALL, which has plenty of hooks and spaces for boots and shoes is floored in practical slate, leads out onto the side footpath, where the locked bin store is located. The UPSTAIRS ROOMS are carpeted and attractively fitted throughout and comprise 4 BEDROOMS- of which two at the front of the house, overlooking the sea, are king-size doubles; both have roomy fitted cupboards, radiator, window seat, TVs and chest of drawers. To the rear, are two twin rooms one of which can be made up as a double. There are 2 BATHROOMS on the first floor, one with bath + shower, basin, WC and ladder towel rail, the other with shower, basin, WC and ladder towel rail.
HEATING is by means of oil fired central heating, with underfloor heating under the slate areas of the ground floor. The steeply terraced GARDEN lies to the rear and has a series of levels climbing up the hillside, affording magnificent views over the bay. Plenty of seats are provided for relaxing and al fresco meals can be produced on the large BBQ. NB Care needs to be taken with steep steps and terraces and young children will need full supervision. LINEN and towels are provided and the beds are made up ready for your arrival. PARKING is on public areas only, there are two public car parks a 5 minute walk away. DAMAGE DEPOSIT £300 fully returnable damage deposit against damage or undue wear and tear.

Holidays in 2016 will be handled by our friends at Classic Cottages. Use the calendar below to check availability.